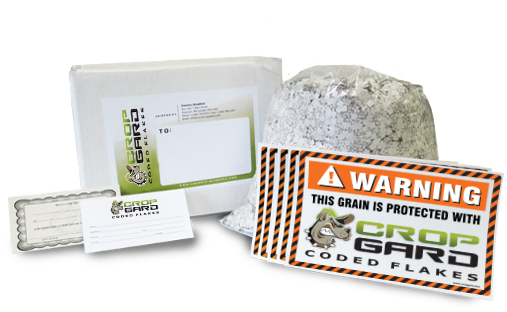 Cropgard consists of ¼” squares of food-safe paper with unique code numbers printed with veggie-based inks. When mixed into your grain, your harvest becomes traceable. We've been producing Cropgard for over 40 years, and have never heard of theft of marked grain. Thieves don't want to mess with it.

This product has many names in the industry, so you may have heard it called Crop Guard, Grainfetti, Grain Confetti, Cropfetti, Grainguard or Crop Confetti. These coded flakes serve as a theft deterrent and marking agent for positive identification, protecting the grain from theft. We also offer a product called Theft Proof for protecting firewood from theft in campgrounds.


HOW DOES IT WORK?

Each box order of Cropgard has an exclusive number and is sufficient to treat 50,000 bu. of grain. Each flake in the grain represents a piece of evidence and proof of ownership. Cropgard can be added to the grain by simply throwing handfuls into the hopper bin on the combine, into the grain auger hopper while the grain is being unloaded into the granary, or at the entry points (top or bottom) of a full bin. Each order also includes 5 warning decals alerting would-be thieves that the grain stored in the storage bin has been treated with Cropgard. What makes Cropgard most effective is the fact that thieves choose not to steal grain with Cropgard in it. If they should decide to take the risk they will be carrying thousands of pieces of evidence with them, wherever they choose to haul it.


WHY SHOULD I USE IT?

Because of escalating production costs and lucrative grain prices, marking grain to prevent theft has again become an urgent necessity. There is also a risk that some insurance companies will only partially cover grain thefts if the grain has not been marked. The RCMP would appreciate the added evidence of Cropgard in the slim chance that your marked grain is stolen.

THIEVES DO NOT STEAL GRAIN TREATED WITH CROPGARD